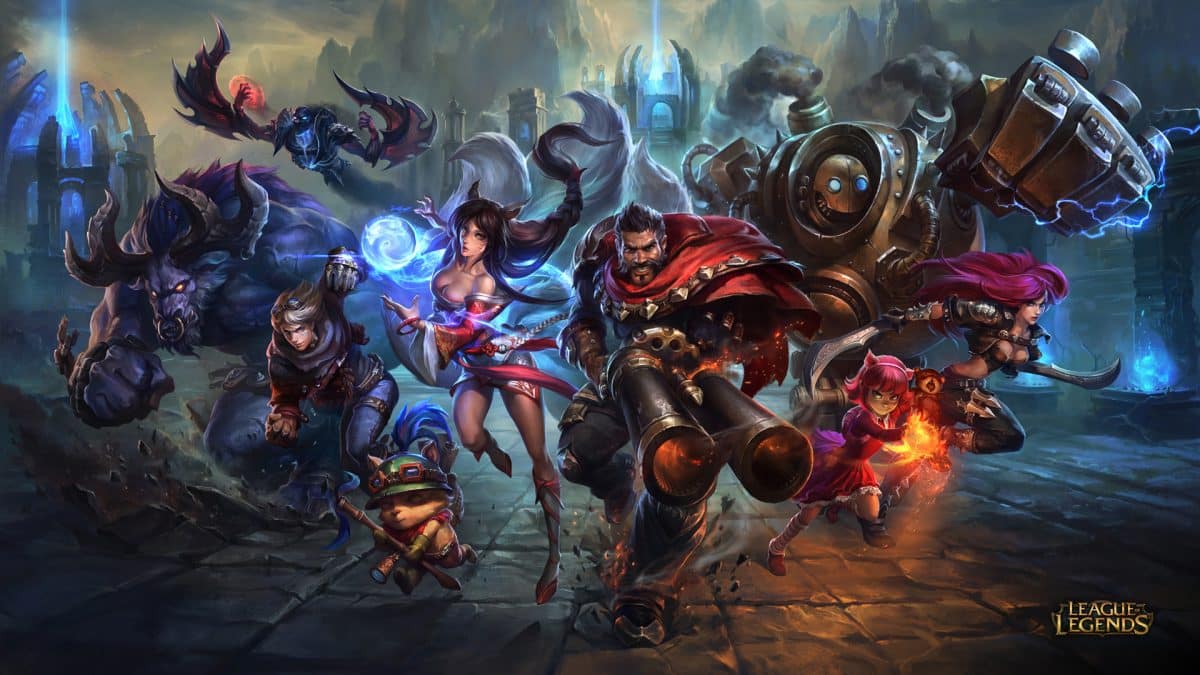 League of Legends is a MOBA developed and published by Riot Games. MOBA stands for Multiplayer Online Battle Arena that started of as a MOD in Warcraft 3, but soon developed as a genre on it’s own. In League of Legends players take on the role of a ”summoner”, that remains unseen in the game. As summoner, players control a ”champion” of choice. There are over a hundred champions, each with their own set of abilities. Together with a team of champions, players face of another team in an attempt to destroy the ‘nexus’ of the opposing team. A structure that is guarded by minons, champions and defensive structures.

Since the release in 2009, the game quickly gained popularity and seized momentum in july 2012, becoming the most played game in North America and Europe (by hours played). The growth only continued. By 2014, as much as 67 million people worldwide played LoL each month, with 27 million players active per day and a constant of 7,5 million players during peak hours. Along the actual playing time, League of Legends became also the most viewed game on streaming site Twitch. Largely due to the lively competitive scene of the game.

Korea has been notoriously famous for winning almost everything that is League of Legends for years. Samsung Galaxy and SK Telecom T1 were just in a league of their own. Europe’s Fnatic being the only team that could barely catch up with the Korean storm. This was 2016 though and recently, there has been shift in meta. The 2018 World finals were played between Fnatic and the Chinese Invictus Gaming, the latter one winning decisively with 3 to 0 in a best of 5. So let’s take a closer look to the teams that have made up the League of Legends competitive landscape over the years.

Invictus Gaming  What happens in football also happens in esports. Rich businessmen buying teams and transforming them to prize winning machines. Founded in 2011, Invictus is actually Catastrophic Cruel Memory revamped. Wang Sicong, son of Wang Jianlin, bought the team for an estimated 6 million dollars and started building towards a team that would promote professional esports in China. A land with much potential, but in terms of gaming always a bit behind in the region. Invictus Gaming consist of successful teams for Dota 2, League of Legends, Crossfire, and StarCraft II.

Fnatic is not just a team or a collection of teams, it’s an industry. Together, they literally won thousands of tournaments worldwide in different genres. Most memorable has to be League of Legends Worlds Season 1 with the team led by Xpeke. Losing many players to other teams, for season 2 the World Champions didn’t even manage to qualify. But never again, in the following seasons to come they are always considered candidates for the title. Earning a second place in 2018 and consecutive third places during 2016 and 2017.

SK Telecom T1 is a professional gaming team based in South Korea. SK Telecom sponsors the team since 2004, when it was a StarCraft team. SK Telecom T1 is the only team to win the World Championship three times and also the only team to win the “Triple Crown”: victories at the IEM World Championship, Riot Mid-Season Invitational, and Riot World Championship. In February 2013, the organization created a new roster, which consisted of Faker, bengi, Piglet, PoohManDu, and Impact. Since then SKT has had a few roster changes. However, with Faker as their midlaner, SKT soon became an unstoppable force. SKT managed to get into 4 world championships since 2012, winning 3 of them. SKT has been known as the emperor of the league of legends competitive scene, standing undefeated, until LCS Worlds 2017.

Samsung Galaxy was originally founded as a StarCraft team in 2005. In September 2013, the organization formed Samsung Ozone and Samsung Blue. Ozone consisted of Homme, DanDy, dade, imp, Mata, and Looper. After both teams performing okay, the decision was made to merge both teams, Creating Samsung Galaxy. With Ambition as their captain and CuVee as the toplaner, the team became a true superpower with an incredible overall performance. The team has been competing with SKT for over 3 years now, standing against them in the LCS Worlds twice. Although they lost the first world championships they played against SKT, they came back with a vengeance. During the LCS Worlds 2017 they absolutely destroyed reigning champion SKT in a 3:0 victory.

Cloud 9 The land of origin of League of Legends hasn’t had much success when it comes to world championships. Considered generally as the ‘weakest’ continent, America still hosts one of the most popular teams in the world. Leave it to America to do the marketing! They entered the world stage in 2014 (season 3) straight in the quarter finals. There first match was against Fnatic, which they lost with 1-2. Game over. In the following years, Cloud9 has shown steady progress. First competing in the group stages, and in 2017 advancing to the semi finals. Season 6 (2018) didn’t deliver that final step in progression (finals), they were defeated in the quarter finals. Undoubtedly, they will be back next year stronger!

When people talk about the best player in League of Legends, there really is no question. Lee “Faker” Sang-hyeok, the midlaner and carry for SKT T1, has been regarded as the best player in the world for years now. His personal skill, intelligence, and inhuman reactions, make it possible for Faker to outplay nearly everyone and come out of seemingly impossible situations. Since 2013, Faker has won 3 world championships, and far more other big tournaments. Even though Faker and his team lost their position as reigning champions, Faker still, undoubtedly, holds the title of best player in the world.

The biggest tournament in League of Legends is the LCS Worlds. The League of Legends Championship Series World Championships is an annual 24 team-tournament with teams from all 13 LoL professional leagues participating across multiple stages. During the LoL Worlds 2017 the event broke the record for most viewers. The 2016 Worlds had a massive viewership of over 400 million views and 360 million total hours watched, over the whole event. The 2017 Worlds broke this, with a peak of already over 106 million viewers during a single match, and an unbelievable 4.3 billion hours watched in total. The League of Legends LCS Worlds is not only the biggest tournament of League of Legends, but also the biggest tournament in eSports history. In 2018, a new record of 200 million viewers at once was reached. There was a total of 6,2 billion hours viewed. An increase of 33% in one year! The explanation behind this surge is the recent success of Chinese teams. With many views coming from China this year to witness the succes of ‘their’ team.