Combining the best of both world, esports and betting. What other place than Vegas could combine these two?! You might think sure, the entourage of Vegas is nice, but I can perfectly bet on esports from behind my pc or on my mobile phone on MasterMazuma as well. And your right! But this time Las Vegas got a scoop: they are organizing the first Fortnite league! The game that has taken the world by storm has potential to become a serious esports. The tournament will be exclusively and fully broadcasted on Facebook, that announced a streaming service for gamers (all Facebook members) recently.

Some things stated above are not business as usual. For one, Battle Royale is becoming a serious esports. Secondly, companies in Las Vegas are willing to invest in esports as a lucrative entertainment model and last but not least, Facebook is attacking Twitch on its position as a streaming service.

What will be called the H1Z1 Pro League will see its first professional battle royale esports league tournament starting on April 21 at a new venue in Las Vegas. The competition will be held by Caesars Entertainment, league operator Twin Galaxies, and game publisher Daybreak Game Company. 15 teams will take on each other in an arena that is circular, so fans have the chance to watch all the teams all the time. Twin Galaxies, co-chairman Jace Hall calls the league the beginning of esports 2.0. This ‘level up’ means that everybody gets to participate in-, and profit from the success of an event. So not only the players on the teams and their owners, but the game publisher, league operator and most importantly the fans as well!

Yes, yes, promoters usually use hyperboles to exaggerate how awesome and game changing their product is gonna be. Whether Jace Hall is right about his claims has yet to be seen. There are indeed promising signs, then again, the build venture can only host 300 people. Which aint huge for esports standards and giving it a VIP’ish vibe.. Let’s see how this translates into ‘everyone can benefit’. 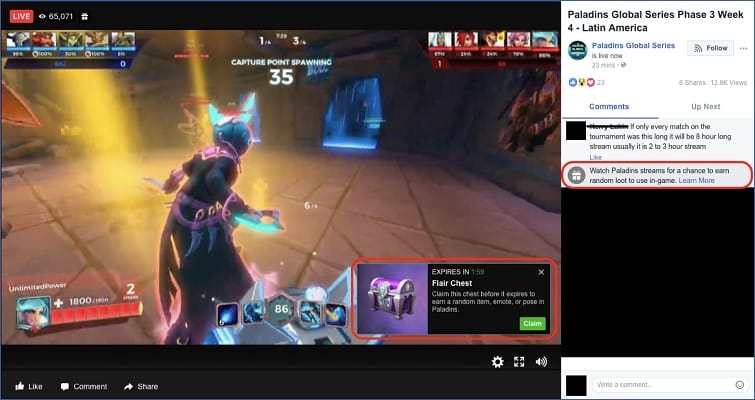 A good indication of how popular a niche is becoming, is looking for big companies to adapt that niche. Even though eSports can hardly be called a niche anymore, the uprising of worldwide mainstream popularity is still relatively young. Today one of the biggest companies of worldwide mainstream culture is opening up to all developers to broadcast their games Live. Yes, we are talking about Facebook!

So should we all go to our Facebook accounts and watch the Overwatch League there from now on? The surprising answer is; you could. The clever heads of Facebook figured that their platform offers something to streamers that Twitch for instance does not: a ready audience. If you are tired of streaming for 2 viewers, switching to Facebook seems like a good step since that platform comes with 100, 200, 300 or a 1000 virtual friends ready to watch. So instead of luring streamers with benefits, Facebook figured, we lure viewers.

Or better yet, we let streamers lure viewers by giving the option to add promotions like in-game items to their stream. For instance beneath the comments you could find a promotion that says: ‘Watch XXXX streams and get a chance to earn loot to use in-game.’

This could be big

Though the audience might not be as dedicated to gaming as the traditional channels, there is a potential of a lot more viewers. Maybe a whole new audience that is about to discover the excitement of watching streams. Facebook in turn gets to hold visitors on their platform for a long duration of time, which opens up possibilities for advertisement.

But the Facebook algorithm opens up a lot more opportunities for streamers, viewers and developers alike. For example, Facebook already has a well developed analytics tool that can be used to reach potential viewers. And there is an existing friend finder that can simply be enhanced by adding games as a parameter.

Though Facebook is kinda late to the party, the massive funds to their exposal make that they can enter this party like a rockstar and have some heads turning. Already they are making deals with CS:GO and DOTA tournaments about the broadcast rights. And a ‘tipping tool’ is currently experimented with.

Streaming on Facebook means people open up about their love of gaming. Question is if the world is ready to really accept gamers for who they are. Until now people went to designated, anonymous places like Twitch of the corners of Youtube to show off their skills. It’s a paradox of Facebook being late on the scene, but on the other hand maybe being to early. Could it be they found the momentum and we will all be watching streams on Facebook from now on? We can’t wait to find out!

What game is the following quote from:

I am Alpha and Omega, the beginning and the end. I will give unto him that is athirst of the fountain of the water of life, freely.

Stand in the ashes of a trillion dead souls, and asks the ghosts if honor matters. What is your answer?

We got yet another good one for you. Don’t forget to claim your free bets by sending us the answer.

I was neglected for years but now i’m back. I am somewhat of a master myself. Some compare me to the likes of dark souls.

Welcome to the first awesome, cool and challenging Master Riddle! Every week, we’ll give you a puzzle to unlock free bets.

I have keys but no locks. I have a space but no room. You can enter, but can’t go outside. What am I?

We are launching an esports Betting site.
Willing to be our Beta tester?

You are perfect for us if:

In return you receive:

Free Bets on our platform
Branded Merchandise once live

Reply below this message with your email and I’ll hook you up.

As an early adopter by pre-registering, you get access to the following perks:

So what are you waiting for, pre-register now!